The “International” World of Yogurt 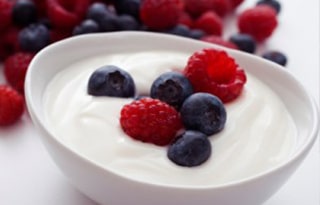 Recently, with the popularity of Greek yogurt, people (myself included) have been shying away from the “regular”, or American, yogurt. Now, our clients are also raving about Icelandic yogurts. Much of the change in the public’s buying habits stems from the reality that both Greek and Icelandic yogurts are high in protein and low in carbohydrates – a combination that helps with weight control – while “regular” yogurt tends to be just the opposite. In either situation, all yogurt provides friendly bacteria that help in better digestion and infection fighting, so whatever your preference, you’re achieving that.

But there are more reasons for eating yogurt than simply getting friendly bacteria, and which yogurt you choose may depend on some other considerations.

Both Icelandic and Greek yogurts are made by straining or “skimming” the milk, each using a different method. The more they are skimmed, the higher their protein level. Icelandic yogurts start with skim milk to make a cheese-like spread that’s high in protein with very little carbohydrate. Greek yogurts are similar, but generally have a bit more carbohydrate and a bit less protein. In both cases, however, the protein content is higher compared to regular yogurt.

One big difference is that with Icelandic and Greek yogurts, friendly bacteria are added at a later stage in the process rather than benefitting from a full fermentation of the yogurt. The level of action of lactase enzyme on lactose, then, is limited, resulting in lower galactose content. Galactose is another importance difference between the types.

Plain yogurt contains a lot of galactose, some lactose, and natural bacterial cultures. Their role is to produce lactase enzyme that converts the milk lactose starter into galactose along with traces of glucose and levulose. Why is this important? Two reasons.

First, the brain prefers galactose and levulose to glucose. If you need something to help calm your nerves and steady your brain function, regular yogurt may be your “cup of tea”.

In addition, an expectant mother’s mammary glands prefer to extract their galactose requirement from the bloodstream in order to make lactose for the baby’s nutrition. If you’re an expectant mother, regular yogurt may again be your choice because of its galactose content.

In conclusion, if you are looking for brain power, infection-fighting capability, or are preparing for motherhood and lactation, choose regular yogurt. If your ultimate goal is getting the most protein for better muscle power, weight control and repair, you’ll want to choose among the Greek or Icelandic varieties.

Regardless of your choice, all of these yogurts have a nourishing place in your overall health plan.