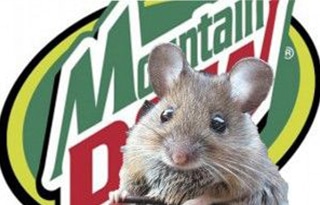 A recent issue of Chemistry and Engineering News had a feature story about a man who filed a $50,000 lawsuit against Pepsi claiming that he found a dead – but fully intact – mouse in a can of Mountain Dew.[1]  He said he had gotten violently ill with the first sip before he discovered the mouse.

Pepsi researched the bottling date and found that incident occurred some 75 days after the soda was bottled. This news prompted their scientists to challenge the claim, insisting that it would have been impossible for a mouse to still be intact after being that long in Mountain Dew. Say what?

It turns out the acidity of Mountain Dew is so high (pH 3.4), that any mouse that found its way into a can of this drink would have been totally devoid of bone mineral in less than a week, and after 75 days would have simply looked like jelly. Wow. That’s a tough brew.

Rather than reveal this disturbing fact, you’d think that Pepsi would prefer paying the $50,000 instead of fighting the claim, but corporate executives were bent on proving to their loyal customer base that a mouse had never been – nor would ever be – seen in a can of their Mountain Dew. Surely, at this point you would think someone at Pepsi would have noted their faux pas, but apparently not.

So now, Pepsi then calls in a noted professor of dentistry at Southern Illinois University, Dr. Poonam Jain, who added further support to the claim that “an intact mouse could not have survived such an acidic condition as what Mountain Dew presents.” Dr. Jain pointed out that hydroxyapatite (a calcium phosphate component of teeth) readily dissolves in any prolonged acidic environment. “Tooth enamel,” she declared, will “erode at pH 5.5” – precipitously, if the exposure is prolonged. As it happens, she and her colleagues in 2007 reported their study of the enamel-dissolving abilities of 18 brands of soda compared to non-cola drinks, including Mountain Dew. Non-colas, her group revealed, were somewhat less acidic than colas. (The acidity of colas, Pepsi included, won this contest due to the addition of phosphoric acid.) Yet, Mountain Dew and the other “non-colas” were far more corrosive to teeth given long term exposure due to the calcium-binding quality of citric acid.

The difference in acidity and types of acidity plays out in different ways. While the weaker citric acid of Mountain Dew possesses the ability to dissolve teeth (assuming the teeth were exposed continuously over a long period), earlier research showed that the signaling property of weak acids on secretin hormone tended to protect the teeth if consumed intermittently by stimulating bicarbonate release from the pancreas, which then entered the bloodstream, ultimately making saliva alkaline.

On the other hand the stronger acidity of colas, such as Pepsi and Coke, tended to dissolve protein-rich tissues while failing to stimulate release of pancreatic bicarbonate (due to its higher dissociation constant), thereby making the entire system more acidic, saliva included.

No doubt, regular consumers of Mountain Dew and Pepsi will sleep better tonight knowing that they are not likely to ever witness the sight of a dead mouse in their drink. Nevertheless, we might encourage them to begin saving for a full mouth reconstruction in a few years!