The Story of Malic Acid 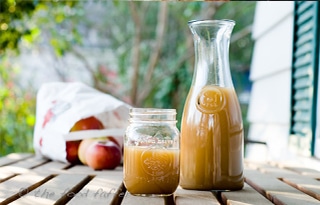 Malic acid offers an example of how plants can teach us a lot about ourselves.

They, like we, are often threatened by microbes, and we both require protection. Plants use carboxylic acid as their primary antiseptic. We use the same chemical as a secondary antiseptic. Both plants and people must keep their supply of carboxylic acid in a concentrated source, releasing the active ingredient only when needed. For plants (and people) that source is either in the form of calcium oxalate or malic acid.

Plants that use calcium oxalate make an enzyme to free it up when needed, but the response is slow. Humans lack this enzyme, and so the carboxylic acid held within calcium oxalate does little more for our defense than to trap the microbe within a calcified crystal without necessarily killing it. Kidney stones and gall bladder stones are the consequences of this effort.

Many plants (and all people) bypass the enzyme requirement for releasing carboxylic acid by storing it as malic acid, where a single carbon holds two potential units of carboxylic acid that’s released without an enzyme requirement. Much more efficient – and as an added benefit, malic acid can be used to supplement the plant’s energy needs. We derive a similar benefit from malic acid, because it tends to alkalinize as it also enters into the aerobic mechanism for producing high energy. This is important since alkalinity and high energy are a disease-causing microbe’s worst enemy. They discourage growth of microbes by taking away the acid, low oxygen, low energy environment they prefer.

So, malic acid protects us against organisms while also serving to provide us with energy. At the same time it helps to alkalinize our body when consumed. We recommend natural (unfiltered or ‘cloudy’) apple juice because apples just happen to have more malic acid in their pulp than any other readily-accepted food source. Sugary, clear, filtered apple juice won’t do. The added sugar destroys malic acid.

When we are deficient of malic acid, and become too acidic, our bodies will make calcium oxalate as part of an emergency mechanism to protect against disease and infection. Kidney stones consist of aggregates of calcium oxalate, with bacteria at the core. If the process continues for too long a period calcification will also begin showing up in other tissues, particularly the arterial wall. So now you begin to see our reasoning.

If you have low energy, or happen to be at risk for kidney stones or heart disease, you can be sure your health assessment will include a recommendation for natural apple cider or juice.